skip to main | skip to sidebar

The planned prologue will be something a long the lines of this:

According to all the best sources, primes are the building blocks of mathematics. The golden ratio appears to be an important building block in our universe - like an four by two lego brick - fundamental, ubiquitous, unavoidable.

It's the fibonacci sequence which gives us access to the golden ratio, which only has a minimal amount to do with primes...

And then there would be a conclusion....

Both infinite, but in different ways.

So, two different kinds of infinity.

That'll do you head in on a Sunday morning, when you're just hungover enough to regret it but not enough to swear off it forever.

The difference between writing and drawing

The trouble with being a writer is that every so often ideas pop into your head, sometimes at inopportune moments.

However, I am seriously considering writing a prose prologue that Alan Moore, Grant Morrison and Neil Gaiman, to name but a few (I'm aiming high aren't I), often have at the start of their work.

I may also start including footnotes as I get a lot of enjoyment from the silly ones in Terry Pratchett books.

But absolutely no appendices, they used to do my head in when I read Lord of The Rings as a teenager. But not as much as the songs, oh boy.

We could have done with this a few months ago!

Still, Christmas is on the way.

I don't know whether this means that Alex has no opinion about my writing or if he's happy with it.

Maybe I'll ask him this week some time.

I'm also thinking that maybe we should have started with a story about werewolves and such like, which I suspect we may have had more fun with. That could always be the next one of course.

So I'm going to a do a major re-write of the story and introduce a second protagonist, whose own story affects and is affected by that of Ulam. This new character will be one of the team that helps communicate with the aliens and of course gets some important stuff wrong, like some fundamentals about weights and measures. This character - possibly called Reeman will provide some light relief and also provide a substantial hook on which to hang a lot of the dialogue about maths.

Here are the first three pages that Alex has been working to:


A MAN AMID THE WRECKAGE

Frame: A broken laptop screen being typed into by a man, Ulam, the text on the screen, reads ‘Einstein was wrong.’

Text that comes before the title page:

these are part of the same sentence but need to be separated in some way to make the gag work.
and I suspect that he cheats.”

I think this page should somehow be related to the golden ratio as well. Also you need to put the number 24,024 somewhere in it – explicitly – I’ll come up with some more ancient numerical symbols for you.

Panel 1: Close up of Ulams face, a bit battered and bruised.
Laptop text in a narrative box at the bottom of the panel “That’s the only coherent conclusion I can arrive at.’

Panel 2: Low angle of Ulam amid the wreckage of the hot air balloon with the Andes in the background – a stunning shot showing the grandeur of the location. David Lean territory.
Laptop text in a narrative box at top of panel: “ ‘Coherent’, of course being a relative term as I am losing blood at a rate of knots, am quite possibly concussed… ‘

Narrative box of laptop text at bottom of panel: ‘…suspect that both of my ankles are broken, and may well be suffering from altitude sickness.”

Panel 3: Wide of the Nazca lines, including the Astronaut, the triangles and that strange thing that looks like a stanley knife blade above the monkey. Ulam and the wreckage need to be visible somewhere.

Panel 4: Wide of the monkey birds eye view ‘Now it’s the end of the world and I am a man amid the wreckage of a hot air balloon. Among the Nazca lines. In Peru. In excruciating pain. With no water. No food. And a laptop with no long term memory. Plus. I’m. Dehydrated.’

Narrative box top of frame:“I feel like having a bit of cry myself…

Panel 2: Wide of Saturn in the distance with a spaceship in the foreground.

Narrative box top of frame: ‘ Seem to remember being at work when everything started to go…’

Panel 3 – space ship bearing down on Earth – with Jupiter in the extreme foreground, Mars in the mid and Earth in the background. There are some images of Jupiter with the sun flaring behind them so the sun could be just behind Earth – some flares off into space.
NARRATIVE BOX bottom right hand of frame “…odd.’

Panel 4: Close up of a front or a radio – all the bits on the front adhering to the golden section - I’ve put a marker in the Golden Section book as a reference – the square with the divided circle in the middle at the bottom of page 30 should have echoes in the speaker grill design of the radio. – Radio announcement - in an electronic looking speech bubble – marker in Create Your Own Graphic Novel – ‘I’m terribly sorry but I’m afraid we’re going to have to interrupt todays…’

Panel 5: Mid of consumer magazine office with the radio maybe in the middle at the back. Ulam is there and a couple of others. Windows down one wall, desks and computer screens, wastepaper baskets. Radio announcement in spiky speech bubble ‘…coverage of the Ashes for a sort of a news flash.’

Panel 7: Mid - 2nd Journalist ‘Or The Duke of Edinburgh.’ 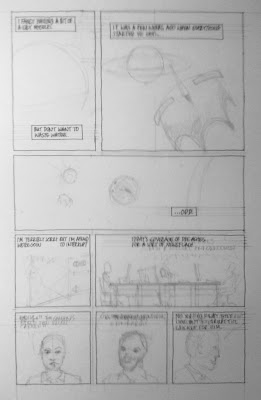 Page 3 pencils, 5pm, Day 3.
So that's as far as we got.  We were on schedule to finish page three, I think, by late morning on Day 3.  But then it dawned on me that having drawn the many boulders on page 2, panel 3 (see previous post) individually, then I was going to have to do the many many many boulders from further away in panel 4.  It works well, I think, but it took a long time.
So I didn't get started on page 3 until after our quick lunch break.  Chris had lots of research all lined up for me (pictures of Saturn; Babylonian Numerology inspired spacecraft designs), so the pencils came together pretty quickly (despite it being fairly elipse heavy in the first few panels), and I even  got going on the inks, but not far enough.
We realised at some point in the three days that what we were actually doing was making a comic the way comics were made when we were kids - but without the staff.  Pencils and ink on Bristol board, with letters done separately, was the way comics were made when we first nurtured those dreams of making comics ourselves.  These days there are more computers involved.  Something for us to think about when we start work on Chapter 2 (or rather, start finishing off Chapter 1).  More research and practice required before then, I think.
They weren't particularly long days, but my brain is tired today.  The level of concentration was higher that I expected.  But as it came time to finish yesterday, I was disappointed to not have more drawing time.
Posted by Alex at 05:13 No comments: 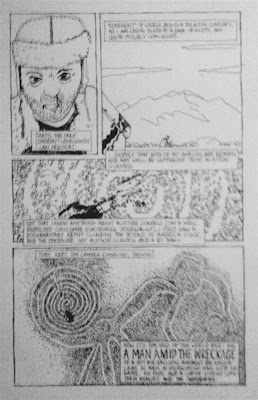 Again, click on the image for more detail.  We'll post better scans of the pages when we can access a big enough scanner...
Posted by Alex at 07:50 No comments:

Christopher Hall & Alexander Kelly
in association with Museums Sheffield, present
A Man Amid The Wreckage
A writing and drawing performance project
Commissioned by
Off The Shelf Festival of Writing and Reading 2008
Millennium Gallery, Sheffield, UK